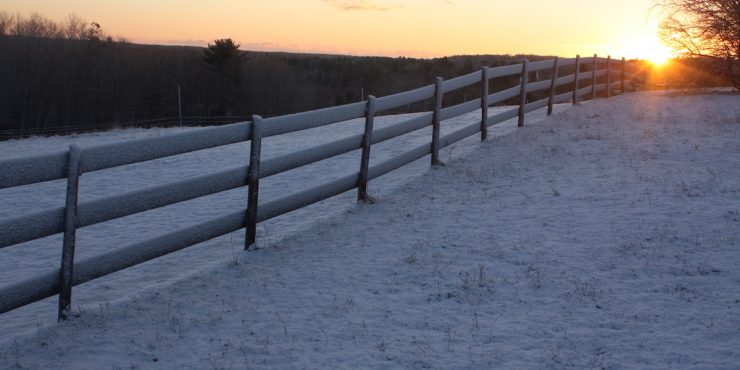 There’s a magic to today, I thought, as I looked out my frosty bedroom window, curling the blankets back from the cocoon of sleeping human carcasses beneath.

I light a small fire in the living room, and the smoke quickly intermingled with my visible breath. Seemingly just moments after igniting the element, the kettle started singing its song, inviting me to my morning coffee break.

Pulling on a sweater, I then look to the animals outside as I do each morning to gauge how heavy to dress, and the cows’ breath sat more heavy and burdensome in the cold morning air than ever before, embracing them where they stood on the hilltop patiently awaiting my arrival. I opted for gloves and the hat, and pulled my winter boots from the back corner of the closet, shaking the film of dirt off the top.

The door was frosted shut, and with a heave I push through, making a dent in the velvet coat of white that rests on the deck. This morning, they would hear my footsteps before seeing my arrival.

Once they are fed, there is just their munching that makes any audible sign of wakefulness across the landscape.

The chickens still sleep, and the neighbours, too. Their surprise is still coming.

And though we all knew it would come, its first appearance is always a surprise- that’s the unreliable beauty of nature, after all.

Living with it and through it brings rosy cheeks, cold toes, more physical labour and more laundry.

But there’s an undeniable magic to it, too, masterful in its ability to convince us our lawn isn’t scattered with plastic trucks, dog and chicken shit and clothespins.

It comes through the night, unnoticed and unknown. Quietly changing our world.

As I stand atop this hill, marveling that each and every tree is equally dipped in shimmering white frosting, I appreciate this silence but know the quiet won’t last. Because when I go back into the house Wren’s reaction will shatter the silence, and though we’re running twenty minutes late, she too will need time to delight in the beauty of what came in the night. Her childhood imagination requires it.

She will need time to bundle up to hop like a bunny through the deck’s playful new offerings, then she’ll need time to change again when it’s now thirty minutes past her time to leave for school because her first clothes became wet while bunny’ing.

I don’t see the world with childlike wonder anymore, like she does, but there’s something that’s still left in me.

Because we’re now thirty minutes late, my feet are wet and we’re hustling to get out the door. But yet today, I’m still smiling.

Because of what came in the night.

One Response to What came in the night